Last week I shared my paper finds, and today I’m back with the fun vintage dishes I’ve added to my collection. (My collection that has outgrown its space, by the way.) My favorite new find was a trio of blue-green glass snack sets. I had never seen anything like them before! 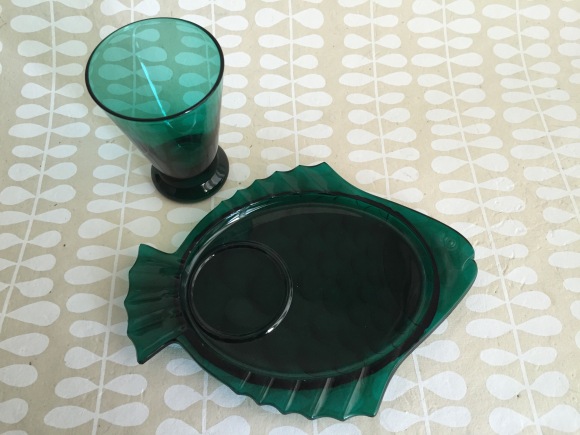 They are pretty tiny…it’s hard to tell from the pictures, but the glass holds about three ounces and the plate is big enough for maybe a few crackers and some cheese? I thought they’d be perfect for a little beer or cider and nuts or cheese. Plus, who doesn’t love a good fish plate? (I did a little googling and could only find these and these…not as good as the blue-green ones with the original cup if you ask me.)

And you may remember these dishes from Jackie’s Lighthouse Tea. They were Peggy’s and now I have a set of my own, including dessert plates to go with the cups and saucers and the creamer and sugar.

Now I just need to plan a little event so I can use them!

Would it be weird to start blogging about my 2015 trip again? Maybe? I’m going to write anyway. I’ve been going through my pictures and reminiscing about all of the fun we had last spring and I realized that I’ve never really closed the book on that trip. I have a few last things to mention about Kyoto and some new editions of Spending the Yen.

We were in Kyoto for our anniversary last year and Hisae (my sister-in-law) took us out to lunch at Yuzu-ya, a restaurant and ryokan near the Yasaka Shrine. At street level, it looks like a black storefront (pictured above) but once you go through the doorway, you see that you walk up a rocky stairway to get up to the restaurant. 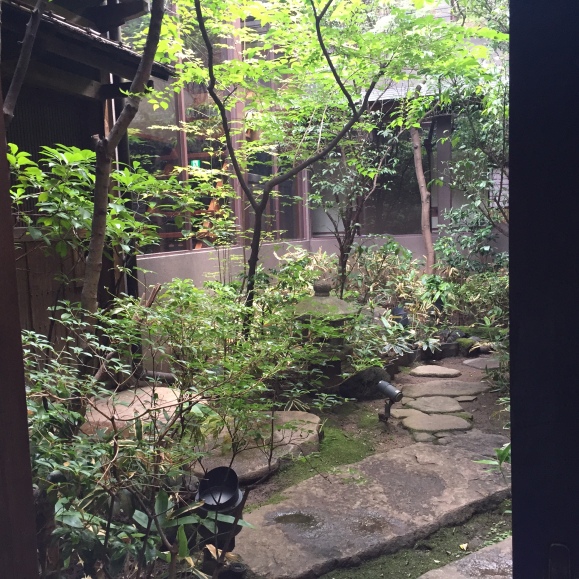 Once you’re there, you forget that there’s a busy street below. It’s surrounded by lush greenery and trees and feels so removed and peaceful.

There is traditional seating near the windows where you can appreciate the trees and fountains outside. We sat at a regular table, but we still had amazing views.

The meal was very traditional, using locally-sourced ingredients and lots of yuzu, hence the name Yuzu-ya. (Yuzu is a Japanese citrus, in case you don’t remember me talking about it before.)  Our first course was an appetizer of traditional Kyoto-fare. As you can see, it was presented beautifully on a tray of tiny plates adorned with leaves. Each bite was so different in taste and texture but it all worked together perfectly.

Next, we had smelt grilled alongside bamboo leaves on a tiny table-top grill. 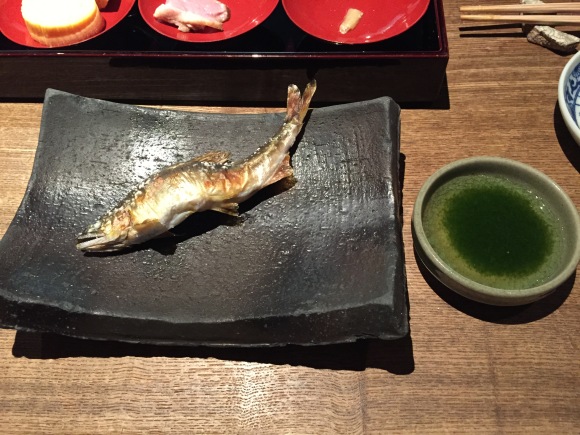 (It was looking at me.) On the side was a yuzu sauce. I picked off as much meat as I could, but Naoto finished it off for me. (He ate every last bit, including the eye and the bones!)Then we had porridge with rice and fish and egg and chives, again cooked table-side and finished with a squeeze of yuzu.

The dessert course was green tea and a brown sugar mochi. A simple but delicious way to end the meal. 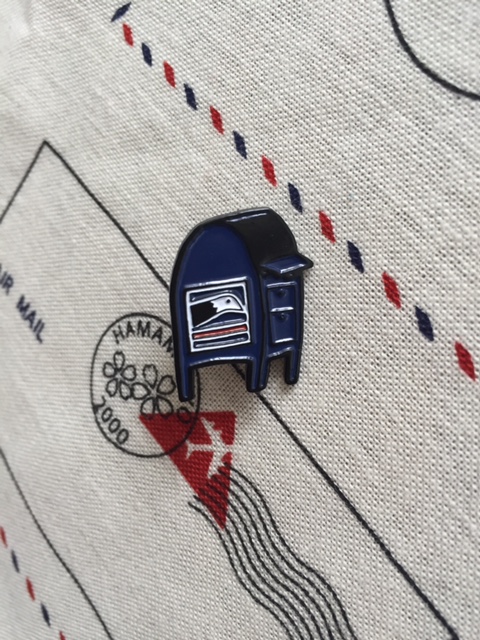 Ok, I know I expressed a little bit of burn-out at the end of February’s Letter Month, but how can I not attempt another letter writing challenge for National Letter Writing Month? Just like last year, I’m attempting to write a letter or card every day in April as part of the Write On Challenge.

P.S. The mailbox pin is made from an original drawing by Marissa Falco and can be found in her Etsy shop, Thimblewinder.

Reading is going fine. 😆 #pahifc #presleyhatesbookclub #ourpleasanthomesbookclub #hamlingarland
N gave me this gin for my birthday and we’re fiiiinally trying it out. It’s really nice in a gimlet, you get the tea notes at the end of each sip. #hasegawahappyhour #kinobigin
Getting all the best pets in while @instanaoto builds his desk. We’re very excited for him to move into his office and out of the dining room! 😆 #pahifc #presleyhugs #petboys
“I’m sorry, were you reading this?” #pahifc #presleyhatesbookclub #ourpleasanthomesbookclub
She was going to go upstairs to nap and realized she’d be all alone up there. #pahifc #lonelycat
Today’s outgoing mail. #feedyourmailbox #letterwritersalliance #vintagepostage #mothersday
Loading Comments...
Comment
×