When we planned our trip to Japan, I knew exactly where I wanted to spend my birthday…bunbougu cafe. Last year, I fell in love with the cafe that mixes stationery, coffee, letter writing, cocktails and tasty food all in one comfortable and eclectic location. 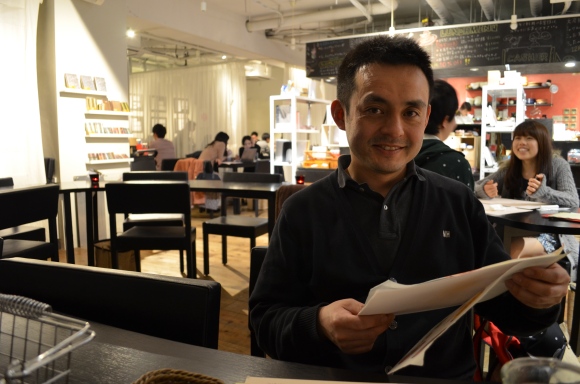 We’d never been to bunbougu at night, so both Naoto and I were excited to try out their one-of-a-kind cocktails.

At the risk of this turning into a Hasegawa Happy Hour post, let me tell you about these cocktails!! First there were the Adult Ramune and the Lychee Squash. Ramune is a Japanese soft drink that has a lemon-lime flavor, but really doesn’t taste its American counterpart…it has its own distinct taste that is tangier than the American drink. The Adult Ramune was made with blue curaçao and soda and it was my favorite. Who doesn’t love a blue cocktail? The Lychee Squash was lychee liquor, soda and grapefruit juice. It was so refreshing! (This might explain why it’s called a “squash” if you’re curious.) Neither of these cocktails packed a serious punch, but they were fun and tasty.

For our appetizer, we ordered edamame that was sautéed with pine nuts and soy sauce. The edamame, presented beautifully on Japanese paper, was oh so delicious…I can’t even explain how much I loved it. We want to try to recreate it at home.

For the next cocktail round, I got the Adult Ramune and Naoto got a Tea Mojito–a mojito that came with a shot of “tea espresso” to pour on top. 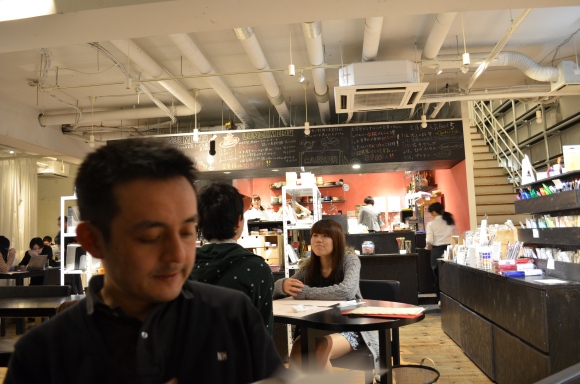 I didn’t manage to take a picture of our dinners. Naoto had a miso coated pork chop and I had roasted chicken with herbs and apples. You’ll have to take my word for it. 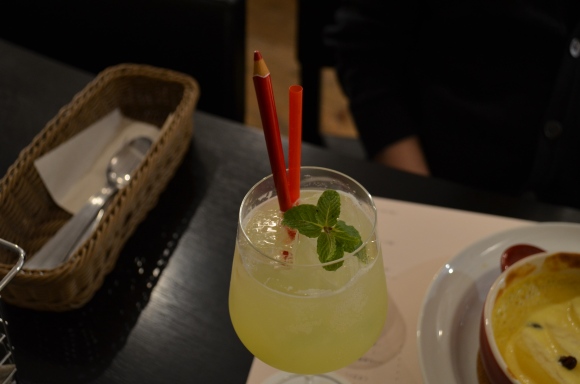 Naoto had a third cocktail. It was called “Sketchbook in the Tropics” and the only thing you need to know about it is that it came with a pencil stirrer!! (They sell the stirrers at bunbougu, too!)

For dessert, I had Matcha Tiramisu…I’m a big fan of real tiramisu, but dare I say the matcha version is better???

Under the tiny paper box was a bowl of kuromame, sweet black soybeans typically eaten on New Years for good health. Naoto enjoyed those immensely while I ate up the tiramisu. 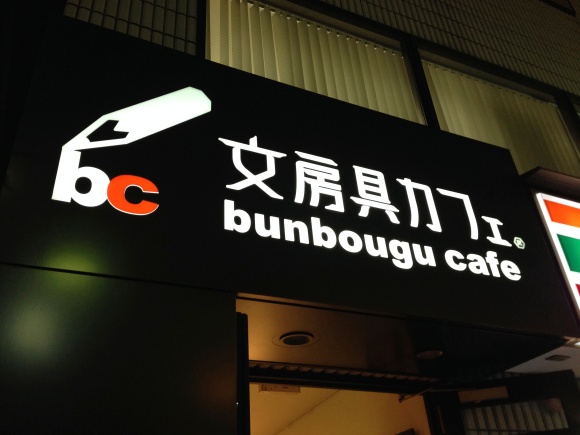 I did a little birthday shopping at bunbougu, but I will share those treats later.

Thanks, Naoto, for taking me to the perfect place! 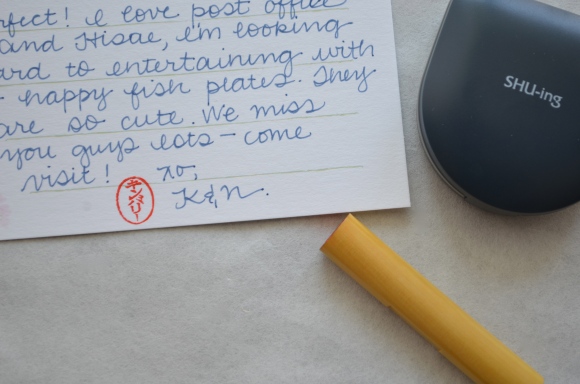 I have many favorite purchases from my trip to Tokyo, so I’m reviving the (defunct) Spending the Yen series.

On this trip, I bought a custom-made inkan. An inkan is an official stamp used in Japan (and other Asian countries) to sign important documents and contracts. Now, I know I’m not living in Japan or signing anything important here at home, but I wanted one as a fun way to sign letters.

Because it had to be custom-made, we knew going in that we had to order it at the beginning of our trip. We planned to go to Itoya to order it because we had browsed their selection last September and we had seen some inexpensive, decent styles. But as luck would have it, we got to buy it at a tiny inkan shop near Naoto’s mom’s neighborhood! We happened upon the shop while waiting for Naoto’s sister to join us before visiting their mom. The shop owner was wonderful to work with, explaining the choices of materials and the process of making the inkan…I love shopping with small businesses! 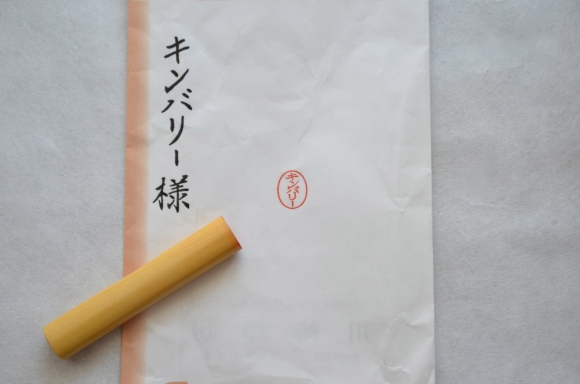 I chose Japanese cedar because it was budget-friendly and natural. A really special inkan can costs hundreds of dollars. I didn’t need anything that serious.The characters that “spell” Kimberly are delicately carved out of the wood. The stamped image is about a half inch tall and I love that it’s oval. (My name is too long for a round stamp.) We picked up the stamp a week later and it was packaged (complete with a little ink pad and case) in the bag you see above. Along the side, the shop owner wrote “Miss Kimberly”. 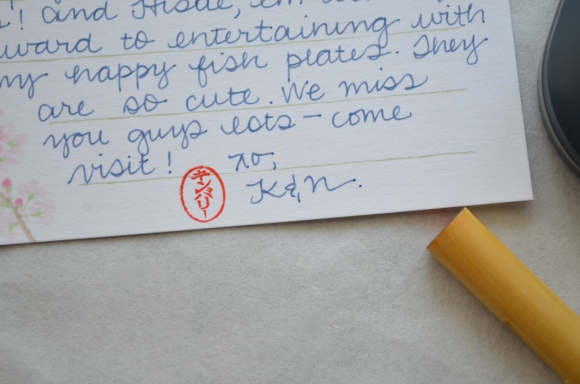 I wrote a couple of thank yous and Easter cards last week and used my inkan to sign them. Official, right?

For my birthday, Naoto signed me up for a Japanese calligraphy class. After an online search he found Koomon, located in Tokyo’s Nihonbashi neighborhood. Koomon offers several classes to sample traditional Japanese culture: calligraphy, tea ceremony, flower arrangement, kimono, origami and other traditional skills. The staff and Koomon was warm and welcoming and my lesson was a lot of fun. 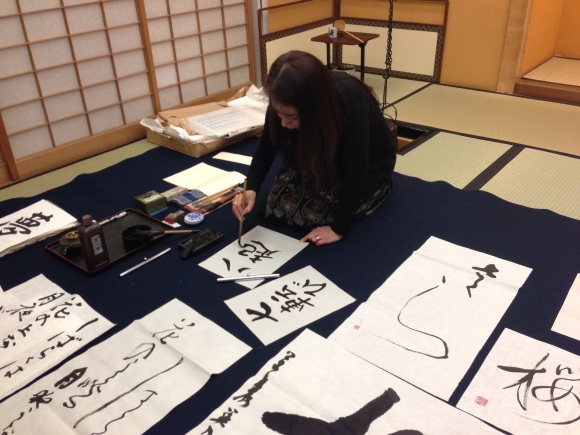 Our calligraphy teacher demonstrated character-by-character the phrase that I chose to write, “Fall down seven times, stand up eight.” In hindsight, I wish I had just focused on a single word instead of a phrase so I could focus on mastering a character or two instead of six. But I love that proverb, so I’m glad I tried it. 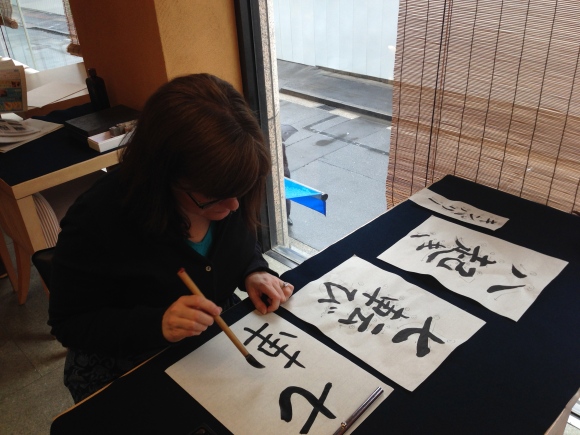 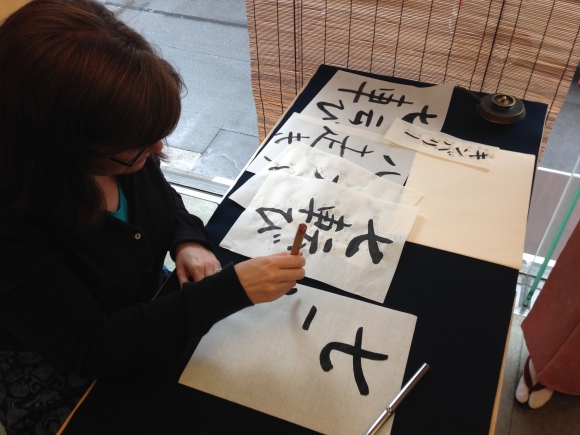 We all decided that the script calligraphy was a little bit too challenging, so I focused on the block-style. It was really difficult for me to get super comfortable with the brush because I was focusing on learning the shape of the characters and the proper stroke order all at the same time. Yukiko and the calligraphy teacher watched me and gave me pointers throughout my practice. One major thing I learned is to really load up the brush with ink. I tend to only put ink on the tip of the brush, but to make beautiful characters, you need to use the entire brush to get variety in your strokes.

Because Naoto was with me (and maybe because he had trouble translating some script calligraphy for me when asked) the Koomon ladies encouraged Naoto to practice calligraphy too. I requested the word “sakura” because we were there in the spring.

I practiced my phrase and specific challenging characters several times and when I was comfortable, I got to work on my “final project” in the tatami room. It felt very special to wear the little apron and write with the progressional calligraphy tools.

When I was finished, all I could see was the “mistakes” and imperfections in my writing, but the calligraphy teacher pointed out that those are what make the calligraphy special.

Along the left side of the proverb is my name and if you look closely, there are three red seals (two on the lower left and one on the top right). There were several seals to choose from, each representing a Japanese phrase. I chose ones that said “May your joys be as deep as the ocean and your happiness as high as the mountain.” and “Fortune comes in a merry gate.” and “A carefree life ensures longevity.”

Thank you, Naoto, for my excellent birthday gift and thank you to Koomon for a wonderful morning of calligraphy! Taking the class has made me want to practice more so I can paint the characters with reckless abandon!

When we planned our trip to Tokyo, we were aiming for kaika jiki (開花時期), blooming season–the time when the cherry blossoms open, leaving parks and paths sheltered under a cloud of pale pink. The problem is, there is no exact date when the sakura will bloom. It all depends on the weather…the crazy, unpredictable weather.

As luck would have it, we missed the prime viewing time (the blossoms really burst open to full bloom after we left) and it was raining on our “sakura day”–our last day in Tokyo. But we got to see some pretty blossoms anyway and next year we hope to go back around the same time, maybe a week later to improve our chances. Sigh… 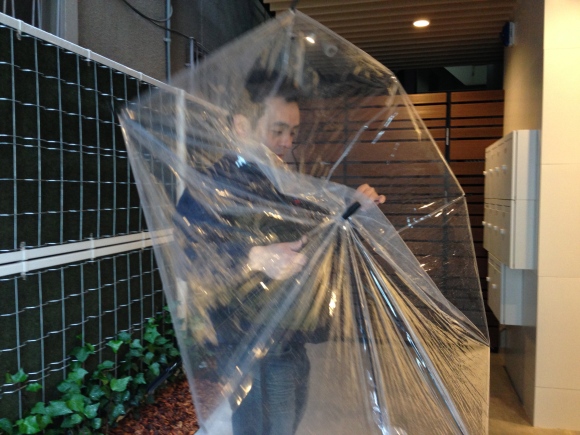 We ended up trying out a few different spots to see if we could find a nice patch of trees in a park. Our first stop was pretty miserable because our poor umbrella blew inside out…twice…to the point where it wasn’t even fixable. I almost gave up because we were drenched and cold.

On a bad tip from a local, we ended up at Meiji Shrine, where we eventually learned, after a ton of walking in the pouring rain, that there were no sakura. 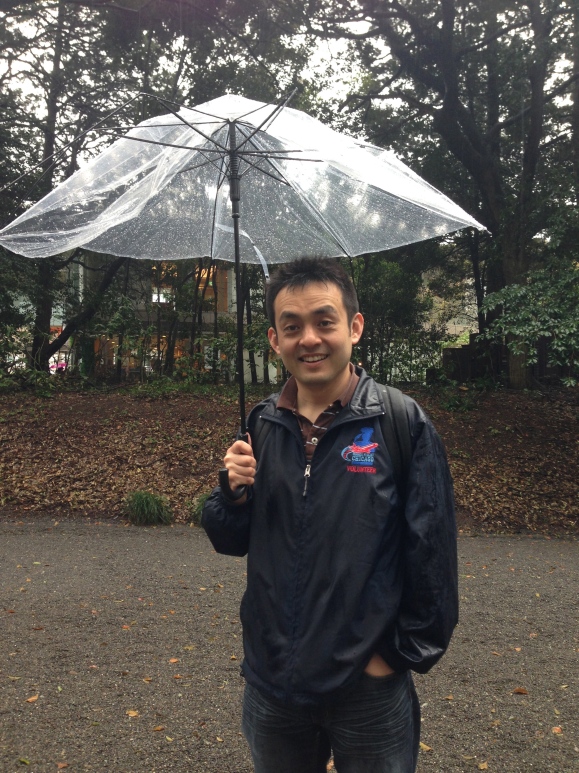 Naoto carried around the broken umbrella because he felt “disrespectful” leaving it in a trash can. (I don’t get it either.) I’m not sure what was worse: getting drenched while we carried a closed umbrella and having people wonder why we weren’t using the umbrella or pretending the broken umbrella was effective (up above). We finally broke down and found replacements at the shrine gift shop and they graciously took the broken umbrella off of Naoto’s hands. Whew! 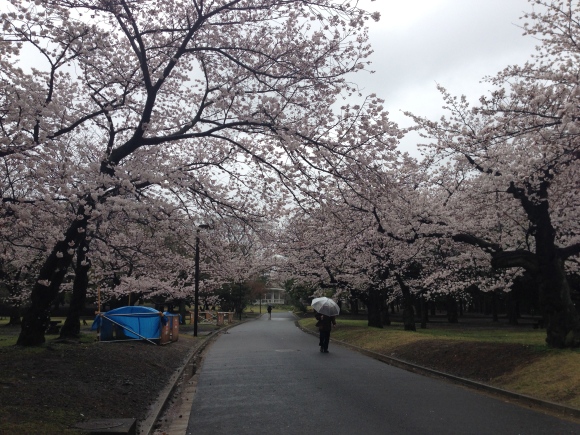 Finally, we ended up at a park near Harajuku and we were met with a grove of blooming trees. And then, all of the rain was worth it. There is nothing like the pale pink of a sakura bloom! The park was breathtaking, even in the rain.

It was fun to see some brave souls enjoying early ohanami (the act of sakura viewing which usually includes a spread of food and drink) under a tent. I felt a little sad that we didn’t get to sit under the trees on a warm, sunny day, enjoying the blossoms, snacks and sake. Hopefully next year. I think that part of the beauty of sakura season is its unpredictability and its impermanence…I can only appreciate that I got to see the blooms in the beginning of their glory. They were so stunning, I can’t imagine how they will look at full bloom.

We have been home from our Japan vacation for a week now, and in case it’s not obvious by my absence last week, adjustment has been rough. I always have a hard time with jet lag–I’m not a good sleeper in general–but this time I was especially delirious and zombie-like. Today, I’m shaking off the cobwebs, unpacking (yes…I haven’t even unpacked one of our suitcases–the one with all the stationery!) and sifting through the pictures from our two week stay in Tokyo.

So prepare for Japan Month Part Two and plenty more Japan Does It Better Posts in the coming weeks. We did a lot of the same things that we did last year and added a few new favorites like the Postal Museum Japan, calligraphy lesson and a Spanish tapas bar. (Yes, I said Spanish tapas.) I will be back on Wednesday with my first post and I will be working on a Monday-Wednesday-Friday posting schedule this month (and maybe longer) while I get back into a routine here at home.

It feels good to be home…and awake!

P.S. The picture above is us (our feet) with a street marker after a late-night dinner in Sangenjaya (our hotel neighborhood).