For our last meal in Osaka, we ate at an Okinawan-style izakaya near our apartment. It was so warm in Japan that we were able to eat pretty much outside during a late October night. 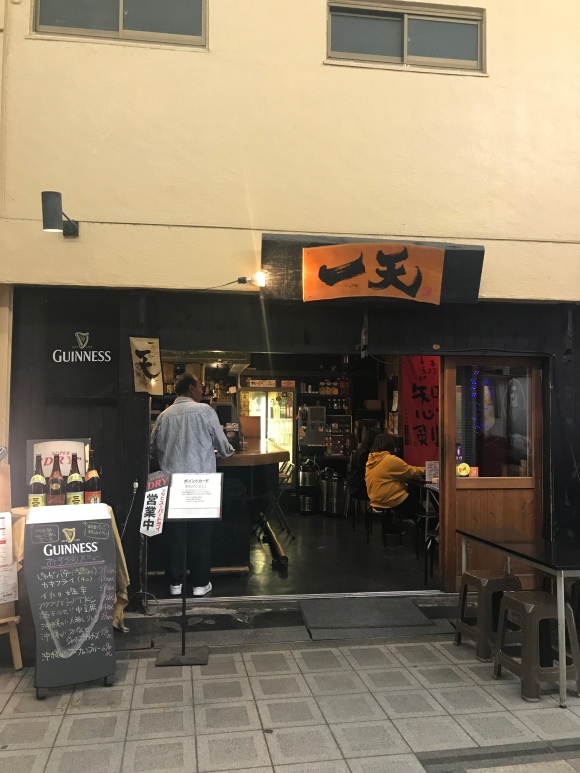 The restaurant was so tiny and our table was right inside that wooden door on the right.

There were a few seats at the bar and two other tiny tables which were full all night. People seemed to be regulars, chatting with the woman working alone behind the bar. Every space of the restaurant was used, including the ceiling where a huge bottle of whiskey lived for easy dispensing. 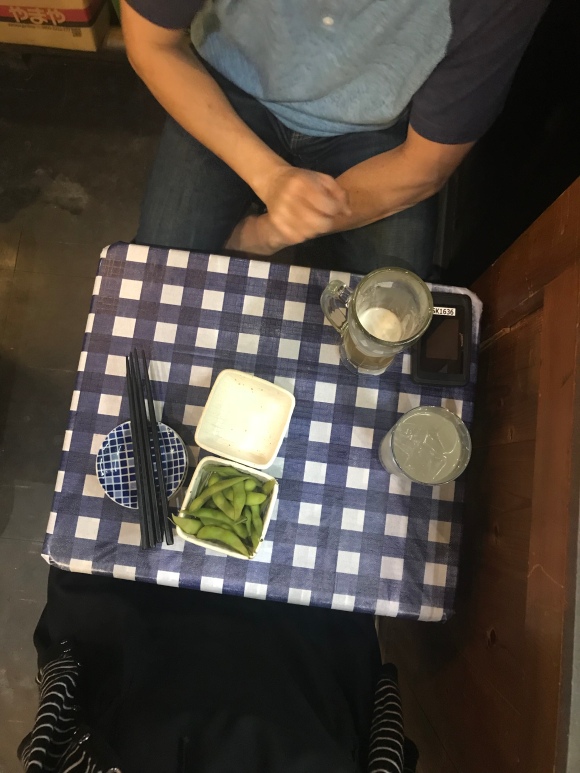 I had a shiikwaasa (an Okinawan citrus) sour and Naoto had beer.

We ate at a late lunch, so I was dining more for the snacks and moral support. We ordered a bunch of little plates, starting with edamame, and moving on to potato salad and buttered corn. The buttered corn was sooo delicious I got a second bowl for myself. I also forced myself to eat it with chopsticks, which was tedious but good practice.

Okinawa cooking has been influenced by American soldiers stationed there in World War II. American GIs shared their Spam with Okinawan residents after the war when meat was scarce. The offerings are right up Naoto’s alley, and he ordered Spam while I munched on french fries.

And he ate locomoco, a Hawaiian-style hamburger with egg and ketchup on top. In spite of all that, on the way home, Naoto stopped and got some takoyaki (an Osaka specialty) to snack on. It was a delightful way to end our stay in Osaka.

Naoto was full of touristy ideas for Osaka. On our second day there, Hisae, Naoto’s sister, met us and spent a day with us touring around the city. Naoto wanted to visit Tsūtenkaku Tower, see the Glico Man, and eat. When a man takes you to hundreds of different stationery stores, you indulge his touristy desires.

We spent the morning in Shin-Sekai, an old neighborhood full of shops and old restaurants and pubs. We ate at a restaurant that specializes in fried kababs. 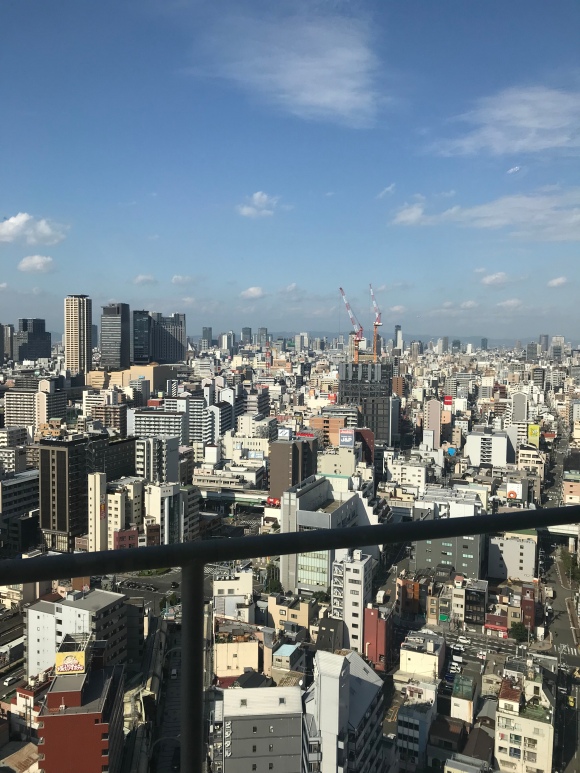 After lunch, we walked to the tower and waited in line for the observation deck. Tsūtenkaku is known as the Eiffel Tower of Osaka and has been around since 1912, though it was rebuilt in 1956 because they tore it apart after a fire in 1943 and used the remaining steel for the war efforts. It’s “only” 103 meters tall, much shorter than Skytree which is the tallest tower in the world, but it was still fun to look out on Osaka. 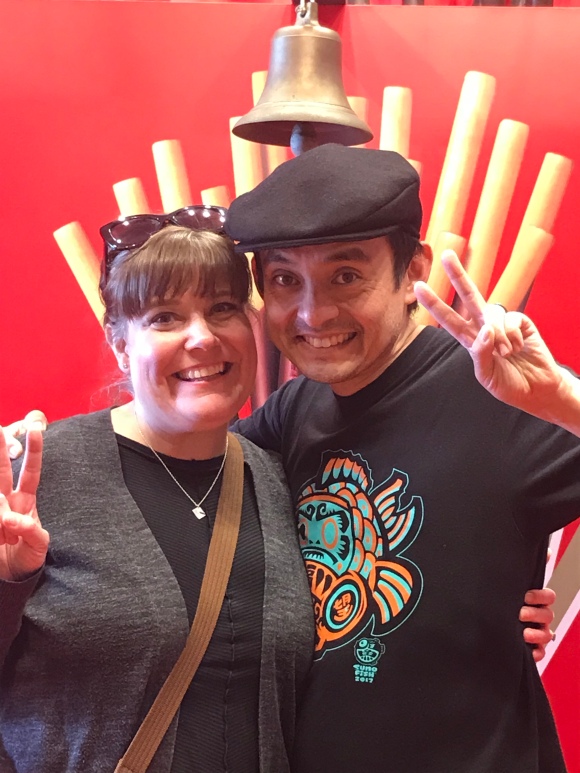 Plus, there were all sorts of weird things to do in the tower, such as take pictures with Pretz and Pocky.

After the tower, we headed to Dōtonbori to see the Glico Man. Dōtonbori is a famous shopping and dining area in Osaka filled with giant neon (and modern LCD) advertisements. Naoto had been there as a kid so he wanted to go back to see the Glico Man. (Glico makes Pocky and Pretz and other famous Japanese snacks.) I’m glad we went, but man was the area crazy! I was glad to leave and head to our quieter Airbnb neighborhood for dinner. Here’s a peek at the Dōtonbori neighborhood in action. I took the film for Instagram Stories, so sorry it’s vertical.

During our stay in Osaka, we took a day to explore Nara. Nara Park is famous for having hundreds of tame(-ish) deer roaming around. Naoto was really excited to take me there. 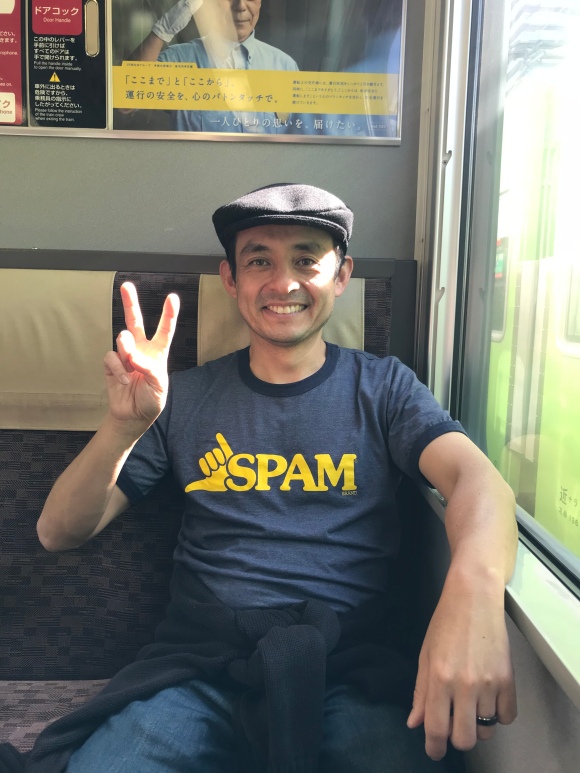 Nara was a train and a bus ride away from Osaka…I love that Japan embraces characters to advertise its travel industry. 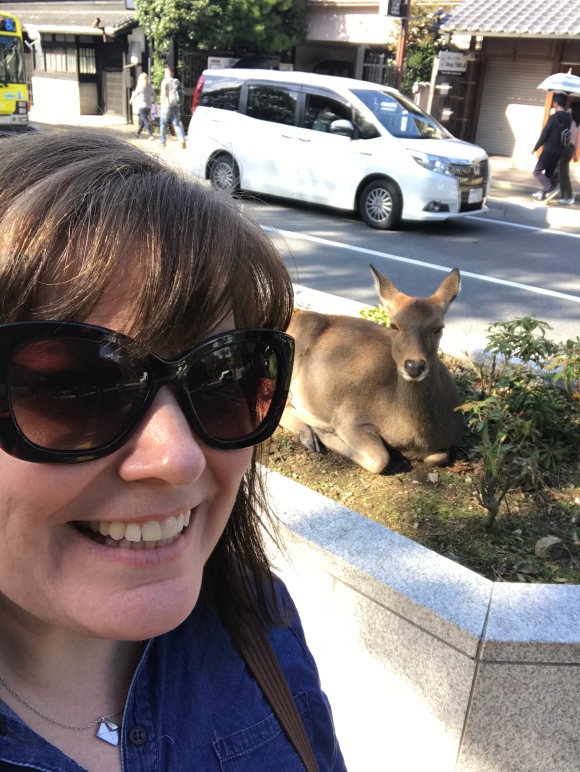 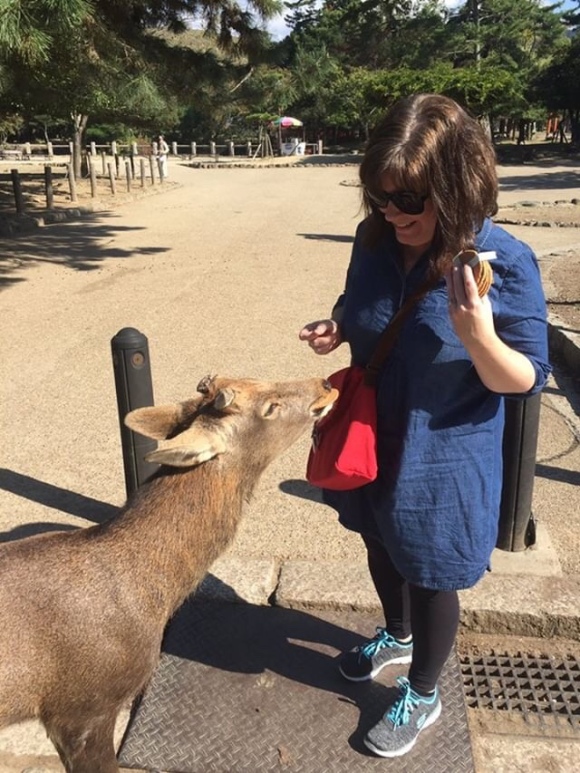 Much like the squirrel park, feeding the deer sounds a lot more fun than it really is. Naoto thrust a stack of crackers into my hand and all of a sudden, several really excited deer were ON me. Man, they really can smell those crackers! It was really intimidating and I just wanted someone else to hold the crackers so I could look around undisturbed.

Naoto, of course, thought I was being ridiculous so he got his own crackers to try to feed the deer. 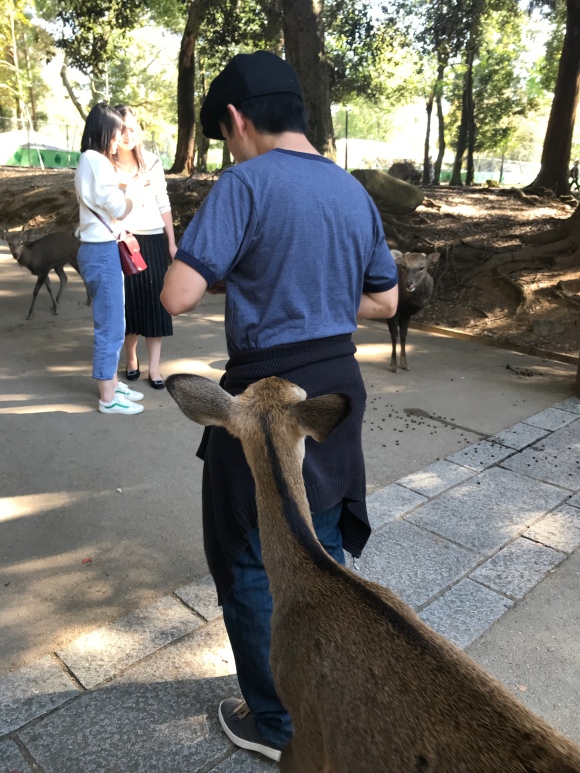 It was all fun and games until one of them bit him on the butt!

They were much more sweet and calm when they realized I didn’t have anymore crackers. (But in 2016, 121 people were injured by the deer…they probably deserved it to be honest…we saw a lot of people taunting the animals, which made me sad for the poor deer.) 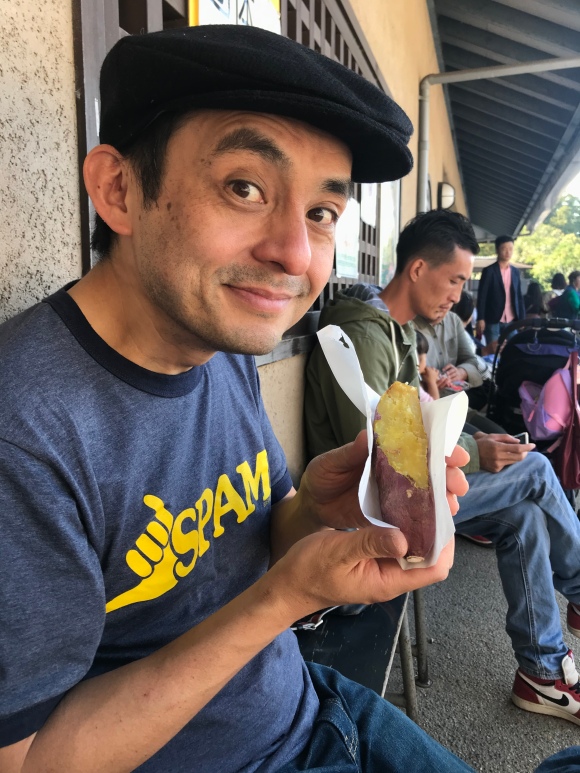 Naoto bought a stone roasted sweet potato from a guy in Nara Park. It was just a simple sweet potato, but it was so hot and delicious.

After we fed the deer, we walked on to Todai-ji Temple. Then we got tired of the crowds and decided to find a quieter area.

We ended up in a little independent shopping district that had so many cute shops selling handmade things made in Nara. We had a sake tasting and bought a few souvenirs and omiyage. I bought some pretty letterpressed postcards with deer on them, some organic cotton socks, and some Nara-made biscotti and fig jam. Luckily for us, it wasn’t very crowded, but the shops had so many great things compared to the touristy areas, I hope people realize that there’s other great indie shopping in Nara, outside of the deer park.

It was really the perfect weather for Nara. We both wore sweaters and had to take them off because it felt like summer in the sun. I’m glad we made the excursion.