I’m behind in my ramen reporting! We tried Oiistar back in February, before we went to Furious Spoon. Oiistar gets really good reviews from food writers in Chicago and it’s made it on several “best ramen in Chicago” lists. It was the first ramen shop in the Wicker Park/Bucktown neighborhood. It definitely has a “hipster feel” to it, for better or for worse. It’s casual and there are individual tables, a counter, and communal seating to choose from. The owner describes his menu as having French and Italian influences, and you can definitely see that in the menu along with some Chinese and Korean. 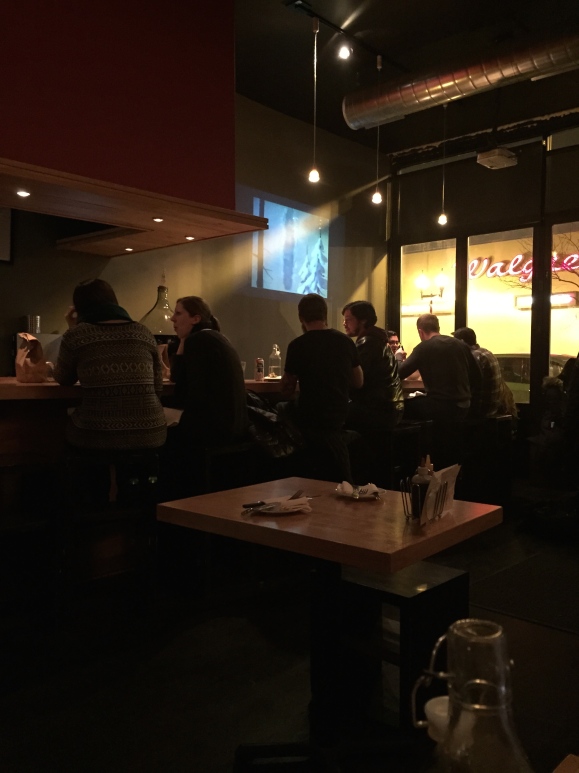 There are old black & white Looney Tunes cartoons projected onto the wall and the music is old school and loud (but not too loud.) It was freezing and snowy the night we went, so we were both in the mood for a hot bowl of noodles. We started with drinks and I will just say this: my review of this restaurant may be unfairly colored by what you are about to see…

My drink, the house-made sangria, was served in a mason jar glued to a candlestick. This thing was enormous and clunky and just plain embarrassing. It was so top-heavy that I kept thinking it was going to fall over and spill everywhere. And it stood up so high on the table that it almost blocked my view of Naoto! Everything else in the restaurant was normal…I just have to wonder what in the world the restauranteur was thinking when he chose to serve his (perfectly delicious) sangria in this monstrosity.

Okay…back to the food. We ordered buns as appetizers. They arrived at our table with our ramen, which was a huge bummer because it was impossible to enjoy both at the same time, as ramen noodles are best when eaten right away. Pictured above is the Tempura Shrimp bun, which is a fried shrimp with chili mayonnaise, fennel slaw, and sesame seeds on a Chinese-style bao bun. It was delicious and something I would order again if we venture back here.

For ramen, I got the oiimen (pictured at the top) with pork belly, egg, scallion, mushrooms, spicy oil, and garlic. Naoto got the kimchee ramen. The ramen was solid, but the texture of the noodles didn’t wow me. They are made in-house, which is supposed to be a huge plus. All of the other ramen places we had tried until that point have them shipped in from Sun Noodle. (In the meantime, Furious Spoon opened with their own homemade noodles and, after eating Furious Spoon’s noodles, I think Furious’s noodles are better.) But the flavors and the pork and the soft boiled egg in Oiistar’s ramen were delicious.

I would love to go back and try some of their salads and snacks. They offer a bruschetta topped with pickled shrimp, fennel, balsamic and olives that sounds intriguing enough for a repeat visit. I just won’t be ordering another ridiculous sangria.

Shoyu butter pasta with cremini mushrooms and chives...one of our favorite meals in Sangenjaya is on the blog today. #2020intokyo #sangenjaya #latergram #umami #shoyubutter
When you just want to be a part of the action... #pahifc
Presley has taken over the job of blog editing. #pahifc #catassistant #latergram
Presley and her Princess and the Pea situation...I woke her up when I came home from work. #pahifc #catnap #princessandthepea
I found these old Polaroid pics of a young @instanaoto in with some of my stuff today. This guy doesn’t change a bit! ❤️ #vintageNaoto
New Traveler’s Factory posts on the blog today & yesterday. ✈️ 🧳 @travelers_company #travelersfactory #travelersfactoryairport #travelersnotebook #2020intokyo
Catching up on some mail today. 💌📬❤️ #feedyourmailbox #galentinesday #valentines #lettermo #letterwritersalliance #vintagepostage #lovestamps
The shade! 😆 #pahifc #pkahcoffeehour
%d bloggers like this: