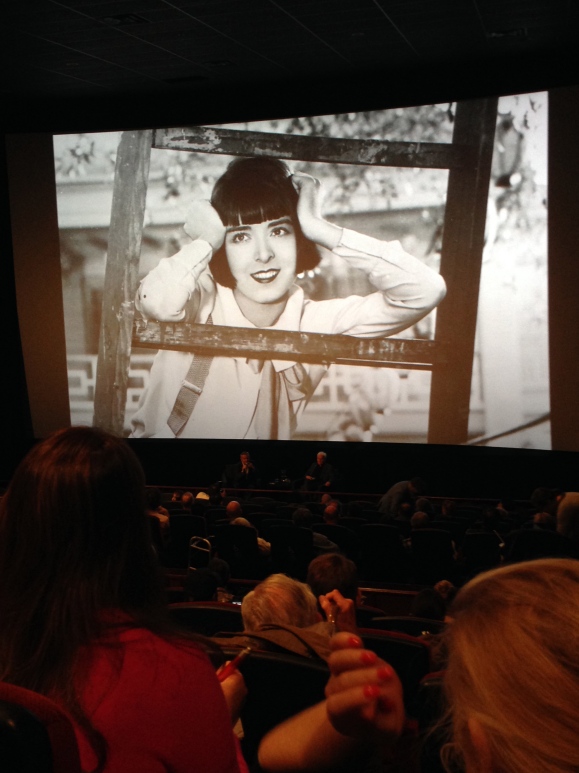 On Sunday night Peggy and I went to see Why Be Good? a recently rediscovered silent film from the 1920s starring Colleen Moore*. Why Be Good? was considered lost for many years, but it was rediscovered in an old Italian movie archive in 2012. This was its 21st century North American debut and it was shown as part of Chicago International Film Festival, which Colleen Moore helped start fifty years ago.

In the movie, Colleen Moore plays Pert, a poor flapper girl who is a wildly good dancer, stays out late, wears risqué dresses and makeup and has the appearance of a “bad girl.” But she’s really a good girl underneath it all. She meets a rich man who falls in love with her, but is hesitant to marry Pert because he fears she is too wild (a.k.a. not chaste.) The movie follows the two of them to different night clubs, giving us a glimpse into the “flapper” lifestyle and 1920s night life. (I couldn’t stop looking at the glassware during all of the drinking scenes!)

Because the movie was made Pre-Code, there were racy (for the time) shots of Pert in her bra and slip and suggestive (for the time) dialogue. (Of course, it’s nothing like movies today.) The wardrobe was just fabulous. Every shoe, every slip, every dress, every coat, every handbag was breathtaking. At one point Pert pulls out a slip that had her name embroidered on it. They don’t make slips like that anymore. (Do they even make slips?) And the music, especially the jazz in the nightclubs, was fantastic. I think there needs to be a soundtrack release. And I know a lot of people don’t like silent films (or haven’t given them a chance) but with Colleen Moore’s expressive facial expressions and the music, I didn’t even realize I was reading the title cards.

The movie was introduced by CIFF founder Michael Kutza (pictured, underneath Colleen Moore on the big screen). He was in his twenties when he had the idea to start an International Film Festival in Chicago. Since he was so young and not socially connected, he was introduced to Colleen Moore. She was living in Chicago at the time and still had many Hollywood connections. In the early years, she helped get a lot of movie stars involved with the festival and gave it a strong start in the community. He told a hilarious story about wanting to invite Joan Crawford to lunch. She was in Chicago for business during her time on the Board of Directors for Pepsi-Co. Colleen Moore told him no, that Joan’s “wings” (facelift tape around the eyes, something like this.) would never make it through lunch!

I’ve never gone to any of the film festivals in Chicago, but this experience made me want to pay more attention to these local opportunities. I’m not a huge movie person but I do love old gems and I enjoy learning about the history of Hollywood. Peggy is a movie encyclopedia so it’s always fun to go with her and learn a little bit more than I would as a movie novice. For instance, Peggy knew Neil Hamilton, the actor who played Pert’s love interest, also played Commissioner Gordon on Batman (the TV show.)

Now that Why Be Good? has been found and re-released, it will hopefully show up at more movie festivals and indie theaters. I highly recommend keeping an eye out for it, even if you only go to see the stunning Colleen Moore and her stylish flapper wardrobe!

*Chicagoans might know Colleen Moore for her fairy castle at the Museum of Science & Industry.

P.S. A little bit more about the discovery and restoration of Why Be Good?   There are some great still shots of the movie so you can get a little taste of the clothes!

One thought on “Why Be Good?”