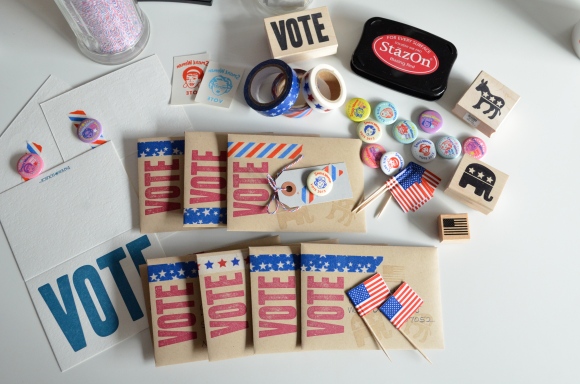 When I was a college freshman, I voted for the first time by absentee ballot. I remember being so excited when the ballot arrived, punching my choices with the little stylus, and dropping the completed ballot in the blue mailbox near my dorm. It was really exciting, but I was so disappointed that I didn’t get to vote in the real voting booth and I didn’t get one of those I VOTED stickers. Upon hearing my disappointment, my grandfather (who always wrote me the most charming letters) sent me his voting sticker. I’d forgotten all about this kind gesture until a few years ago when I was sifting through all of my college mail and I found it folded in a letter written in my grandfather’s beautiful script. Just thinking about it makes me all weepy.

Since then, I’ve voted at the polls in every election–and I’ve always proudly sported my I VOTED sticker. And, for the past few Presidential Elections, I’ve sported these Smart Women Vote buttons. This year, I did a mass mailing and sent a bunch out to my friends and pen pals. It’s a “safe” political outreach, because it’s non-partisan…I’m a firm believer in agree-to-disagree…I know I’m not going to change anyone’s mind about their political leanings, just like they are certainly not going to change my mind. (I am very stubborn.) But I do think it’s important to vote–so, no matter which side you are on, or whether you live in a red state, a blue state or a swing state…as they say in Chicago–vote early and vote often!*

Don’t forget to brush your molars! #pahifc #dentistcat
Things are busy so this account is becoming a Presley fan account...even more so than usual. Hopefully back to mail and stationery and cocktails and other things next week. 😅 #pahifc #catnap
Her little paw on my hip 🥰🥰🥰 #pkahcoffeehour #pahifc
I can’t take the cuteness. #pahifc
You can’t tell by the stamps, but this is a sardine themed mailing. #dadami #feedyourmailbox #letterwritersalliance #lettermo #vintagepostage #lovestamps
#pkahcoffeehour is back. #pahifc
Loading Comments...
Comment
×
%d bloggers like this: