My blogging and letter writing has fallen by the wayside thanks to the Olympics. No regrets though. These games are so much fun and the Adami-Hasegawa medal count competition is as close as it’s ever been (USA 12, Japan 10 as of this morning.)

I always throw a mini Olympics party, but this year the Olympics crept up on me and I didn’t have enough time to plan appropriately or come up with a theme cocktail. Party or no party I love decorating above our TV for the Olympics. Every year, I break out my flag banner and in 2016 I added an Olympic torch. (My guest room closet is pretty much the party prop room. I can’t save everything, but some things are small enough and took enough time to create that I figure they should be reused. If you ever need a sakura branch or some giant cacti, please give me a call.) This year I made some Olympic rings to hang. They’re a little small, but now that I’ve made them, I think I can probably work out a giant version for Tokyo 2020. 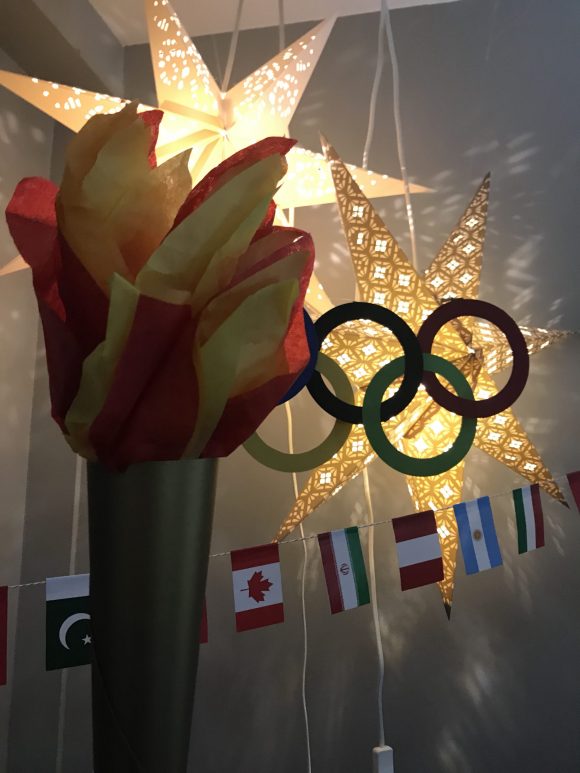 Do you have a favorite Olympic event? I used to think mine was ice skating, but now I think it’s pretty much whatever is happening right now.

N gave me this gin for my birthday and we’re fiiiinally trying it out. It’s really nice in a gimlet, you get the tea notes at the end of each sip. #hasegawahappyhour #kinobigin
Getting all the best pets in while @instanaoto builds his desk. We’re very excited for him to move into his office and out of the dining room! 😆 #pahifc #presleyhugs #petboys
“I’m sorry, were you reading this?” #pahifc #presleyhatesbookclub #ourpleasanthomesbookclub
She was going to go upstairs to nap and realized she’d be all alone up there. #pahifc #lonelycat
Today’s outgoing mail. #feedyourmailbox #letterwritersalliance #vintagepostage #mothersday
Having #hasegawahappyhour in the #circlegarden today while I try to decide where we’re planting the two new hydrangeas. We have lily of the valley popping up, a hydrangea from the previous owners coming back, our wild geranium is blooming, and our new strawberry even has a couple blossoms 🍓Oh the possibilities of spring! #springgarden #lilyofthevalley #columbine #wildgeranium #forestparkgrows #aviation
Loading Comments...
Comment
×
%d bloggers like this: