Leave a comment
By kimberly ah adventures, what's for dinner 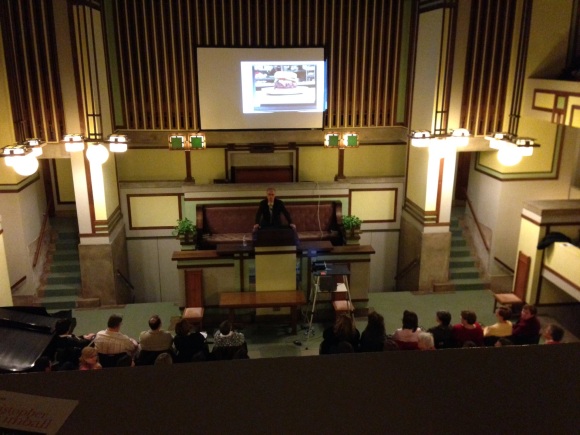 Last night, Naoto & I had the pleasure of listening to a talk about the science of cooking with Christopher Kimball. The event was held at Frank Lloyd Wright’s Unity Temple, where Naoto & I got married. Mr. Kimball is the host of America’s Test Kitchen on PBS and the founder of Cook’s Illustrated magazine. Naoto and I watch America’s Test Kitchen whenever we can, and we especially love the equipment tests and Christopher Kimball’s geeky wit. I was happy to see that he wore his signature bow tie, though I missed his red apron. (I suppose it would be weird for him to wear it outside of the kitchen…) What I liked best about the night was that Christopher Kimball was able to debunk a few myths about cooking–things that you hear TV “chefs” claiming all of the time. (Example: Searing meat does not “hold in the juices”.) It’s nice to know the Test Kitchen is out there trying recipes hundreds of times and getting it right so I only have to try it once.

More scenes from last night…the return of @theflatfivechicago was just magical. 💖 #hasegawahappyhour
#hasegawahappyhour Anniversary Night Out Edition.
Happy Re-Opening Day, Illinois! One last #spritzerswithpritzker to mark the occasion. #hasegawahappyhour
Always fun to check the ol’ PO Box and find something in there! #📬 #showandmail #snailmail #letterwritersalliance
Presley’s Big Adventure. She sat on my lap for 15 minutes and just looked around at the fireflies. Next stop, the grass. I think she’ll love it. #pahifc #housegawa
I think @instanaoto is about to get fired. 😬😬😬 #pahifc #catmanager #workfromhomelife
Loading Comments...
Comment
×
%d bloggers like this: