Naoto & I spent the whole weekend together celebrating the every day of seven years of marriage. We did nothing exceptional, we just enjoyed each other’s company and lots of good food. Naoto popped out on Saturday afternoon and brought back this huge bouquet of flowers “from Presley”. It was such a sweet surprise and I’m enjoying having them at my desk (for maximum enjoyment and minimum Presley “enjoyment”.)

After relaxing on the balcony with breakfast and coffee, we headed to the community garden to check on the plants. We did a fair amount of weeding and watered our plot. (I will talk more about the garden later this week…we are both amazed and thankful to see it’s growing!) 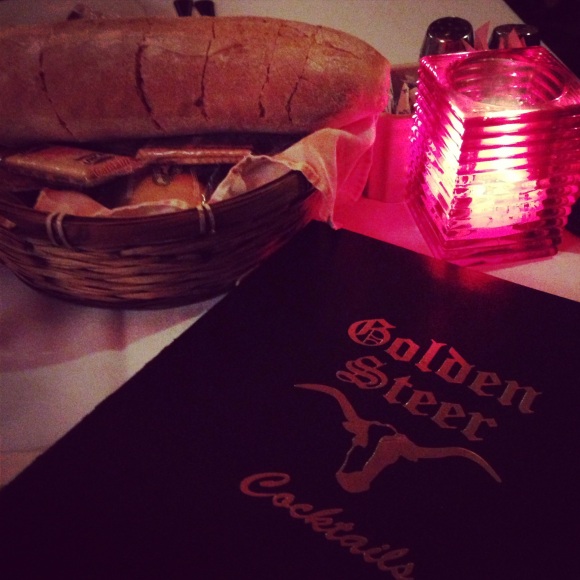 After relaxing out on the balcony and watching it rain, we headed to the Golden Steer for our traditional (since moving to Forest Park) anniversary dinner.

It was our fourth year going there and it never disappoints. I always fill up too much on the cracker basket, the French Onion Soup, the salad and the baked potato to eat much of my steak! And the lone button mushroom floating around on the steak plate makes me giggle every time…

After the Steer, we went to the Marion Street Cheese Market for dessert. Naoto had a chocolate dessert with a homemade chocolate marshmallow and some snicker doodles and I had a strawberry rhubarb dessert (sweet pastry layered with strawberry rhubarb and topped with meringue).

Sunday was our actual anniversary. We slept in, had coffee and exchanged gifts (more on that later). Then we reluctantly went to the gym together. So romantic, I know.

After the gym, we headed to the Little Goat Diner. This was Naoto’s choice, not that I needed any arm twisting. I did a little research and realized that it’s an easy trip on the el (too easy…I think we might have to get pie and coffee at least once a week now!) 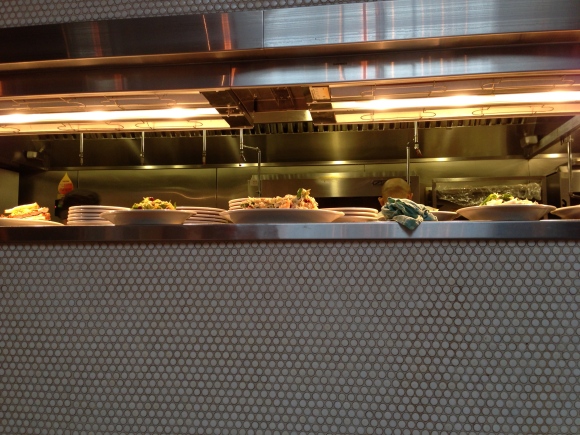 Little Goat was busy, but they could seat us right away at the counter, so we decided to try it out. We’ve sat in all of their seating options now (communal table, booth and counter) and while the booth is nice and quiet and private, we both really enjoyed the frenetic people watching at the counter. It was neat to see the orchestration of the orders and to hear the cooks interacting with each other. 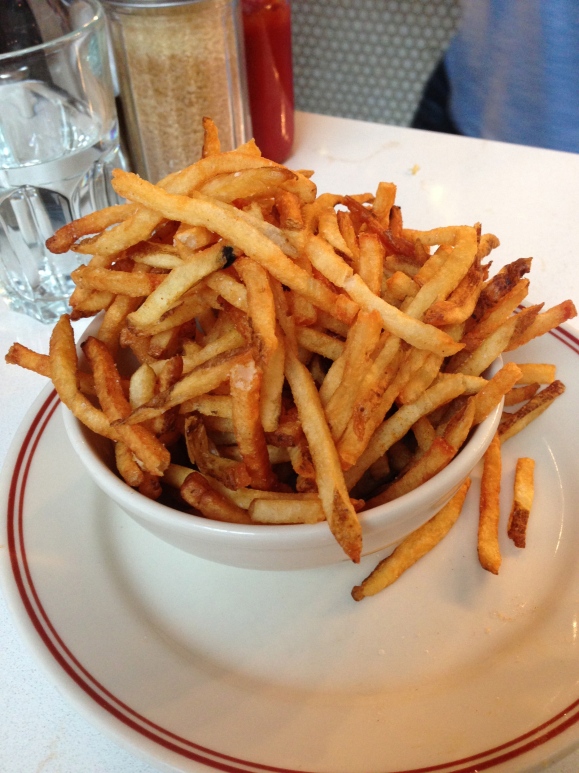 We ordered the Smoke Fries…and I don’t think I will ever NOT order the Smoke Fries in all future visits. They were skinny and perfectly crisp and savory…my idea of the perfect fry. (My passion for these fries will now rival my love for the pie.)

Naoto got the Tonkatsu sandwich, which came with this tasty-creative pickled daikon radish, zucchini and rhubarb salad. I decided, since I always feel too full for pie, to get a CUP of the Tomato Apple Soup, which now comes with a tiny Monte Cristo sandwich on the side (instead of the original, reeeeallllly good cheesy toast from our visit in February). I was super disappointed…until I took a bite of the Monte Cristo…it was like eating a tiny ham and cheese sandwich in between two savory donuts…

And for dessert, of course I got the pie (Blood Orange Meringue) and Naoto got the Miso Hungry Banana Split…ice cream covered in a miso sauce with miso chips on top. Weird? Not at all…it was amazing!

(I just realized that I spent most of my anniversary post talking about Little Goat Diner…no regrets!)

When we got home, I made us two Blue Hawaii cocktails (more on these later) and we lit our unity candle and toasted seven years.

It was the perfect ending to the weekend.

4 thoughts on “Our 7th Anniversary Weekend”