iowa is the new hawaii

Last year, our friends, Erin & Jason (along with their son Frank) left Chicagoland for the hills of eastern Iowa to live on the family century farm. The farm has been in Jason’s family for over one hundred years, so they all moved back to live on the land of the previous generations. 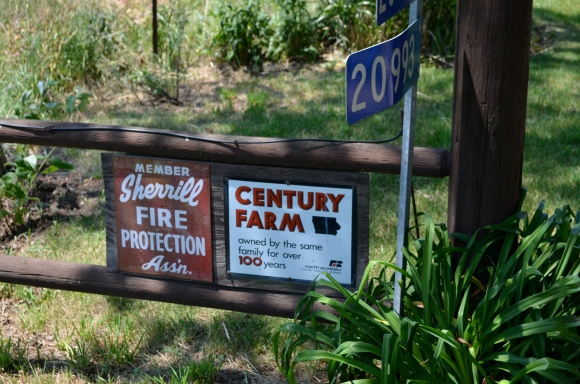 On Friday, we went on a happy hour river cruise and had dinner at the Red Top Supper Club. Have you ever eaten in a supper club? It was kitschy and oh so filling…We sat down to a plate of sweet rolls, a huge relish tray and cracker basket. The relish tray consisted of potato salad, beets, crudites, corn relish, carrot salad, bread & butter pickles, pub cheese and braunschweiger (I did not eat this.) Our meals came with soups & salads (with the salad dressings served at the table). Our dinners had names like schnitzel and chicken cordon bleu. I enjoyed a delicious Tom Collins. When we were done eating, a small plate of tiny pies arrived at the table. Most people end their meals with Brandy Alexanders or Grasshoppers or some other kind of ice cream drink…and as much as I wanted one, my stomach could not hold another bite of Midwestern richness…After dinner, we walked around Dubuque and went back to the farm and sat around a fire and drank some homemade raspberry wine. Jason’s dad is a total Renaissance Man, and his raspberry wine is delicious–not too sweet like most homemade wines.

On Saturday, we headed out to the Farmer’s Market and went up the Fenelon Place elevator. The elevator is similar to a street car, except it takes you up to the top of a giant hill in downtown Dubuque. It is said to be the shortest, steepest scenic railway. 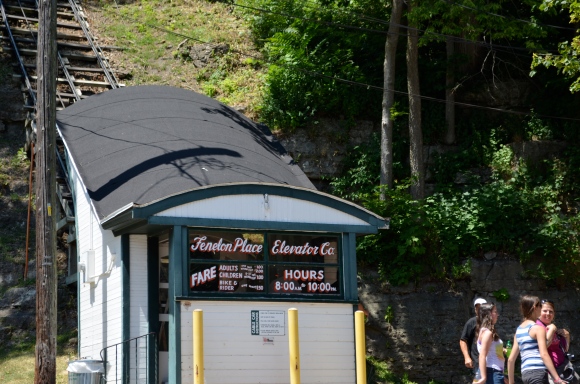 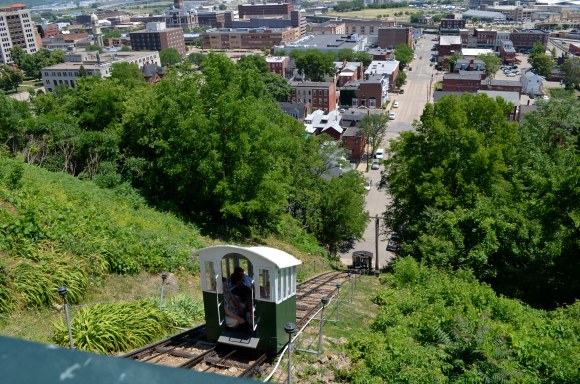 Later that afternoon, we went back to tour the farm. When he was growing up, Jason lived on a working farm with dairy cows. Now the land is rented out to a local dairy farmer who uses the land for a place to graze some of his future dairy cows. It was mating season. There were two bulls on the farm and one was, shall we say active…twice…during the tour…with two different cows. (He didn’t even take a cigarette break.) Nature is alive in Iowa!

Naoto was all smiles here. He’d never been so close to a cow before. But he started getting a little nervous when they began surrounding us.

After the tour, Jason grilled some pork chops and fresh asparagus. (The pink Cointreau Coolers were replaced with Miller High Lifes soon after this picture was taken.) 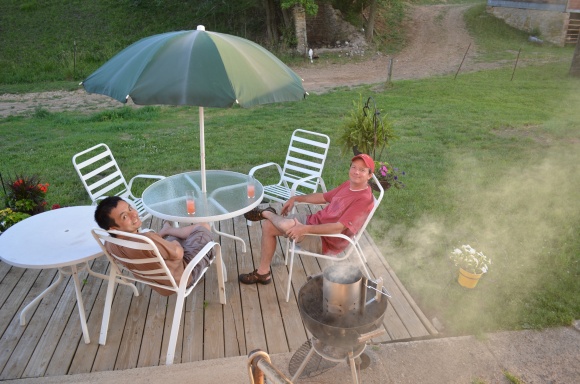 When the sun went down, Jason expertly built a fire and we roasted marshmallows and made smores and drank more raspberry wine and just had a perfect close to a relaxing vacation. I joked during our drive that Iowa is the new Hawaii, but this vacation was filled with idyllic weather, good food, gorgeous views, old friends and happy adventures…without the jet lag and the long plane ride. For us this summer, that’s just about perfect.

9 thoughts on “iowa is the new hawaii”

Leave a Reply to Deb and Jim O'Connor Cancel reply